127 kilometers and 4,700 spectacular meters of elevation gain among glaciers, countless 4,000-meter peaks and the enchanting mysticism of centuries-old mountain villages – this is the Stoneman Glaciara, Roland Stauder’s exclusive mountain bike experience in Switzerland.
difficult
Distance 129.7 km
Duration23:00 h
Ascent4,700 m
Descent4,853 m
The Stoneman route leads through three balanced stages, up into the Aletsch region and back to Mörel. With almost 1,600 meters of elevation gain, the most challenging ascent follows: an old military road leads steeply up to Breithorn pass at an altitude of 2,451 m. Next comes the descent into the Binntal valley. From then on, it follows the Rhone river towards Obergoms – through ancient, mystical villages, past monuments steeped in history and by inviting cafes. Stoneman Glaciara is calling. Calling on adventurous mountain bikers ready for a very special challenge in the midst of spectacular scenery.

Use marked bike trails and routes only, making sure you observe all signposting. Kindly close gates after passing through. Please be considerate to walkers, as well as to plants and animals. As a rule, walkers have priority. When planning, take into account participants’ fitness level and ability. All riding is at one’s own risk.

Information about the destinations:

The long descent from Moosfluh past Riederalp and Greich to Mörel requires your highest concentration. In some places, short technical passages have to be traversed. In the valley basin, the route changes to the shadow-side of the Rhone, leading below Bister towards Grengiols over mostly flat terrain. The steep slope of Grengiols always raises the pulse a few notches. A mostly flat asphalt section then leads to Breithorn. And here it begins – the Stoneman Glaciara’s Alpe d’Huez. After a seemingly endless steep climb (1,450 meters of elevation gain and 14 cutbacks) up a WWII-era military road, the route reaches the Breithorn Pass, the roof of the Stoneman Glaciara (2,451 meters above sea level).

From here, the route takes a long descent (12 kilometers) through fields and gravel roads to Heiligkreuz – once a popular pilgrimage site. The Stoneman Glaciara continues in Binntal Landschaftspark. Over a short intermediate ascent, it approaches the village of Binn, the starting point to the village of “Im Feld” and Binntal. The original mountain villages with their old houses of dark larch wood served as lodging for the “Strahlers” (shining men) as they uncovered rare minerals.

The first part of the stage runs downhill on an asphalt road. The route branches off to the left to bypass a tunnel. It crosses the beautiful, narrow Twingi gorge on a fortified path. The abyss of the Binna creek lying about 200 meters below comes in and out of view. This is followed by a short, asphalted section before the Stoneman Glaciara, running above Ausserbinn, continues along a beautiful path towards Ernen. Ernen – once the ecclesiastical and cultural center of Goms – is the bearer of the Wakker Prize for its particularly well-preserved historical village center. The route now more or less follows the course of the Rhone – upstream through Mühlebach (village center with the oldest wooden houses in Switzerland) – Steinhaus – Bodmen near Blitzingen to Reckingen.

In Reckingen, the Stoneman Glaciara switches again to the sunny side of high valley. It passes many mountain villages (Gluringen, Ritzingen, Biel, Selkingen, Blitzingen) that characterize the local cultural heritage with their traditional, ancient larch houses and dense village centers. Asphalt roads lead to Niederwald. Cäsar Ritz – king of hoteliers and hotelier of kings – grew up in Niederwald. The mountain village has been preserved in its original state and unique aura. The route leaves the village with a tough ascent up to Bellwald (300 meters of elevation gain) through a fir and larch forest.

Starting from Bellwald, the sun terrace of Goms with its charming, old village center, the Stoneman Glaciara runs more or less flat, switching between road, unpaved path and trail through the villages of Ried, Eggen and down to Bodmen. Next follows a local favorite trail along a glacial moraine. A wide path, interspersed with many roots, leads through a beautiful forest. It soon turns right towards Fieschertal. After a flat section though the villages of Fiesch and Lax, the first challenging ascent leads up about 1,200 meters to Fiescheralp. At the top, the route passes the cable car station and heads North towards Märjela, mostly flat at first, then briefly sloping to a tunnel entrance. This adventurous mountain route (about 1 kilometer long, cool and sparsely lit) ends directly at checkpoint Märjela.

Marjela, a truly mystical place! Along the Gratzug, where a glacial lake formed long ago, legend has it that enchanted souls came out of the ice at night. Even today, the Large Aletsch Glacier radiates a magical allure. The short walk to this spectacular view is a must. The view of hundreds of meters of ice and gaping glacial fissures commands wonder. The Aletschhorn rises high above the scene. The route begins on narrow paths along the eastern face of the Eggishorn and runs down to Fiescheralp. Careful! After a flat approach, a demanding passage follows, part of which has to be walked. Onward through an alpine landscape, following signs for Bettmeralp and Riederalp. These trails make every mountain biker’s heart beat faster. The Stoneman Glaciara leads up a last steep climb to the Blausee and on to Moosfluh, once again rewarding the effort with a unique view of the Large Aletsch Glacier.

CFF train to Brig via the Lötschberg (from Bern) or Sion (from Lausanne). Then take the regional trains (and cable car) to your departure.

From Sierre follow route 9 until Brig. Then take route 19 (direction Furka Pass) to your departure destination. The villages around the Aletsch Glacier (Aletsch Arena) are car free, access by cable car only.

Follow the local car park routeing at the chosen destination for departure.

The tourist offices in the region have a range of brochures and other informative material about mountain biking in the region.

We recommend: a bike in excellent working order, a helmet, gloves and a bell, clothing suitable for the weather (always carry a waterproof), food and drink. 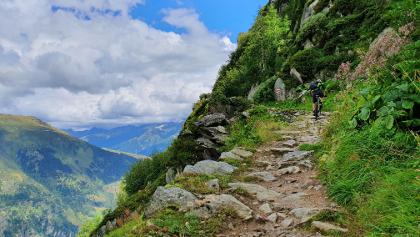 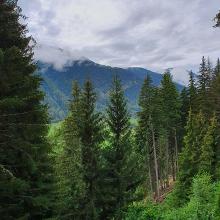 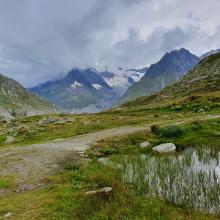 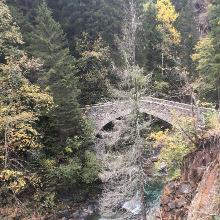