The Grand Chavalard (2,899 m) is the dramatic peak towering over Fully. This hike traces a high loop around the summit, between altitudes of about 1,850 and 2,450 m.

Starting at the top of the Jorasse chairlift, the trail leads through a sequence of magnificent alpine landscapes. The views are spectacular, including from the highest point of the circuit, the Col de Fenestral (2,453 m): over the Fully lakes to the Mont-Blanc massif in the background.

From here, the trail leads down into the bowl, passing close to the largest lake, the Lac Supérieur de Fully (2,128 m) – part of a pioneering hydroelectric scheme that began operation in 1915. The hydropower station fed by the reservoir lies way down in the Rhône valley, near Fully, and for nearly 20 years boasted the greatest hydraulic head of any such plant in the world (1,643 m).

Further along the trail hikers get a thrilling impression of this drop. As the path leads across the steep southern flanks of the Grand Chavalard, walkers enjoy breathtaking views all along the Rhône valley – and straight down to Fully.

These slopes are the setting for one of the most dramatic sports events in Valais: the “Kilomètre Vertical de Fully”. This race of exactly 1,000 vertical metres starts at the power station and follows the tracks of a disused funicular railway up to an altitude of 1,500 m.

The route climbs through vineyards, meadows and forests, across a short bridge and even through a 50-metre tunnel. With gradients of 60% and more, this is the world’s steepest – and therefore fastest – vertical kilometre race.

Our trail, meanwhile, is much gentler. After traversing the southern slopes of the Grand Chavalard, it turns north to complete the loop, before a final short climb back to the chairlift summit station.

Start at the top of the Jorasse chairlift (1,940 m), where the Restaurant de Jorasse has a large panoramic terrace and children’s playground. Climb gently to Petit Pré, where the loop proper begins. Follow the loop anticlockwise, starting with a gentle climb to the pastures of Euloi, which turn into a magnificent lake when the snows melt in spring. The path then climbs more steeply to the Col de Fenestral and the welcoming Cabane du Fenestral.

The trail drops down past the larger of the Fully lakes to the Cabane de Sorniot (2,064 m) before climbing out of the bowl to traverse the southern flanks of the Grand Chavalard. At L’Erié, the trail turns northwards, eventually passing a third mountain refuge – the Gîte de Lui d’Août (1,957 m) – just before completing the loop at Petit Pré. The trail then leads back along the spur to the summit station of the of Jorasse chairlift.

Train to Sion or Martigny, then postal bus from either of these stations to Leytron. Change to bus for Ovronnaz (bus stop: “Croisée du centre”). Walk about 400 m to Jorasse chairlift. Find full timetable information at sbb.ch

A9 motorway, exit 24 (Riddes). Follow signs to Leytron, then Ovronnaz.

The tourist office in Ovronnaz has got brochures and information material about hiking in the region. 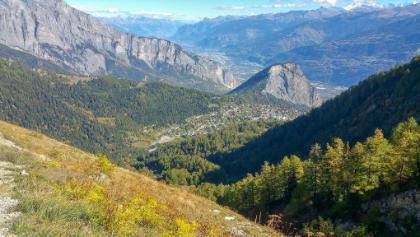 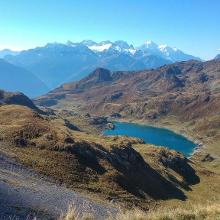 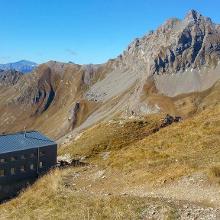 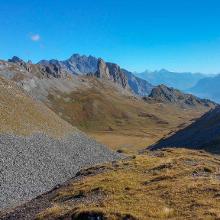