Loop from Champéry to Lacs d’Antème

The Lacs d’Antème are a cluster of alpine lakes below the serrated pinnacles of the Dents du Midi – one of the most recognisable mountains in Switzerland. The highest peak, Haute Cime (3,257 m), towers above the lakes, which are framed by flower-filled meadows: a bewitching sight.

The trail begins at the railway station in Champéry, one of the earliest tourism destinations in Switzerland: the first hotel opened here in 1857. Our route quickly leads up to one of Valais’ first tourist attractions: a vertiginous path across the sheer cliffs that overlook the resort. A local entrepreneur called Emmanuel Défago opened the “Galerie Défago” in 1864: the trail mostly follows a natural ledge across the cliffs, but in places workmen had to cut into the rock to produce a continuous path. A century later, the cliff trail was extended to a total of 600 m. The views of Champéry and the whole valley become ever more spectacular along the way.

Our route then continues across the mountain flank to reach the river Tière, fed by the Lacs d’Antème high above. The trail zig-zags up the steep slopes to reach the first of the lakes (2,032 m) and, close by, a welcoming mountain hut: the Cabane d’Antème.

The refuge can provide information on a separate nature trail that leads from the hut to the other small lakes, linked by filigree streams. Audio guides available from the refuge reveal the secrets of the many alpine plants that flourish in these peaceful hanging gardens, the legacy of vanished glaciers. The nature trail is under 2 km long, and takes around 45 minutes.

The main itinerary leaves the lakes to trace a different route westwards, before zig-zagging steeply down through forest to rejoin the outward leg of our hike just above the river La Vièze.

Starting at the station, the trail leads south through Champéry to cross the river at Vièze for a short climb up to the Galerie Défago. The trail passes a small café and the entrance to the “Accrobranche du Dahu” – an adventure rope park through the treetops. Various itineraries include the “Tyro” course with 8 zip-wires, up to 180 m long.

At the end of the Galerie Défago, the Cantine des Rives restaurant enjoys fine views over Champery; specialities include Raclette cheese melted over an open wood fire.

Our trail continues to the river Tière, close to the end of an impressive via ferrata. This fixed-rope climb scales the cliffs that tower over the river downstream and its waterfalls. Access to the via ferrata is from Champéry below.

Our trail is clearly marked up to the lakes and again beyond across the open slopes and down through the forest. Our hike rejoins the outward leg below the entrance to the Galerie Défago.

Arriving from Brig or Geneva, take the Simplon line to Aigle and then take the AOMC regional train to Champéry. Find full timetable information at sbb.ch.

A9 motorway, exit 18 (St-Triphon) if approaching from Lake Geneva or exit 19 (Bex) if driving from higher up the Rhône valley. Follow signs for Monthey and then Champéry.

Large car park at the railway station in Champéry.

The tourist office in Champéry has got brochures and information material about hiking in the region. 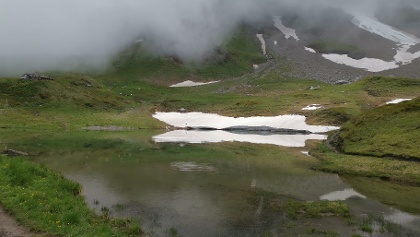 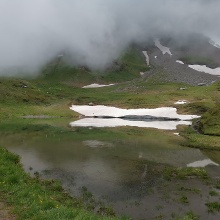