Responsible for this content
Valais/Wallis Promotion Verified partner  Explorers Choice
A Ageev
on the August 15, 2019

too much sun and almost no shady places to rest. do not go ...

When the pioneering Lötschberg tunnel and railway line opened in 1913, the new route provided the first year-round link between Valais and the Swiss capital. Together with the Simplon tunnel, it offered a fast and comfortable way of travelling across and under the Alps.

The stretch of line south of the tunnel is the setting for one of the region’s best-loved hikes: the Lötschberger-Südrampe («Lötschberg south ramp»). To celebrate the line’s centenary, the trail was extended from Lalden station all the way to the historical town of Brig.

Our hike begins at Eggerberg, just west of Lalden, about 200 vertical metres above the valley floor. From here it traverses the sunny, south-facing slopes until dropping down to the Rhône by Brig. The railway is quieter following the opening of another pioneering line in 2007: the Lötschberg base tunnel, 400 vertical metres lower, which can accommodate trains travelling at up to 250 km/h.

The first stretch of the hike leads fairly close to the railway line until it passes the Brigerbad thermal pool complex down on the valley floor. With its 12 indoor and outdoor pools, its water slides and spa, this is one of the country’s largest thermal spa facilities.

The trail now traces a route some way above the railway line: first below the saffron-growing village of Mund, then along a «Suone» irrigation channel, the Driestneri, created to provide water for the line’s fire prevention installations.

Just before reaching Naters, the trail passes over a former top-secret underground fortress. Today this hosts two museums: one devoted to the site’s military history, and another to the Swiss Guard in the Vatican, for which Naters has supplied more soldiers than any other Swiss municipality.

Starting from Eggerberg railway station, the trail is clearly marked throughout.

The first stretch of path follows a route a short distance uphill of the railway line, before crossing it via a footbridge after about 1.7 km. The trail now follows the line closely as it leads above the villages of Lalden and Brigerbad on the valley floor. As the trail approaches the Brigerbad thermal pool complex, it re-crosses the railway and traces a route uphill of the line all the way to Brig. The entrance to the underground museums in Naters lies a couple of minutes’ walk to the right of our hike.

The full Lötschberger-Südrampe trail leads from Hohtenn railway station via Eggerberg to Brig: a distance of about 27 km.

The full trail also forms the final half of the Walliser Sonnenweg («Valais Sun Trail»), a long-distance hike that leads in 4 day-stages from Crans-Montana to Brig.

A9 motorway and main road up the Rhône valley to Visp; then follow signs for Eggerberg.

The tourist office in Brig and the BLS (railways) have got brochures and information material about hiking in the region.

Do you have questions regarding this content? Ask them here.

A Ageev
August 15, 2019 · Community
too much sun and almost no shady places to rest. do not go during hot summer days.
show more Show less
Completed this Route on August 15, 2019
Photo: A Ageev, Community
Comment 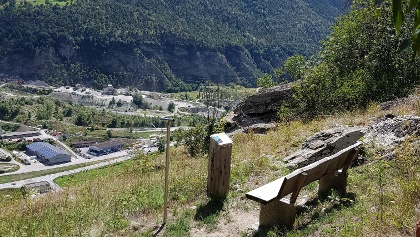