The Great St Bernard Pass has been an important alpine crossing since Roman times, a major link between northern and southern Europe. The historic pass road also gives access to thrilling hiking terrain.

This trail starting at the pass is a high-altitude loop featuring three climbs to mountain cols, each revealing different views. A little past midway round the loop, the Lacs de Fenêtre are three idyllic mountain lakes on a flower-filled plateau at about 2,500 m. The view of Mont Blanc and its neighbouring snow-capped peaks is sublime.

Hikers should allow time to explore the pass area and its historical hospice, founded in the 11th century to offer shelter to travellers and pilgrims. Highlights include a fine baroque church and its glittering treasury. A small museum explores the local fauna and flora, geology and climate, and traces the pass’s eventful history – including Napoleon’s crossing in 1800 with an army of 40,000.

Throughout the Middle Ages, pilgrims crossed the pass on their way to Rome – following an itinerary first described by Sigeric the Serious, Archbishop of Canterbury, who passed this way at the end of the 10th century. Today, the Via Francigena once again offers hikers a historical trail all the way from Canterbury to Rome – which our alpine loop follows for its final climb up to the pass.

The stars of the hospice, however, are the St Bernard dogs, kept by monks here for centuries. Today, the breeding kennel is in Martigny, run by the Fondation Barry, but every year some of the dogs return to spend the summer up at the pass – now in new kennels, inaugurated in 2017. Visitors can accompany dogs on guided walks in the surrounding mountains.

Admission to the kennels and museum is free with the PASS Saint-Bernard – which also covers a wide variety of other attractions in the region plus public transport.

View this tour on SwitzerlandMobility:

From the summit of the Great St Bernard Pass, follow the road for 100 m on the Swiss side before taking the path on the left to climb steadily up to the Col des Chevaux (2,714 m). The path drops down to the bottom of the valley beyond, the Combe de Drône, before beginning a second ascent to the Col du Bastillon (2,754m). On the far side, the trail descends to the shore of the first of the three Lacs de Fenêtre before threading a course between the second two. A third ascent leads up to the Fenêtre de Ferret (2,694 m), which marks the border between Switzerland and Italy. The path then zig-zags down to the pass road before taking a separate route up to the Swiss border, the pass and hospice – the fourth and final ascent of the hike.

Train to Martigny; change on to St-Bernard Express, direction Le Châble. Change platform at Sembrancher for train to Orsières. Change on to postal bus for Great St Bernard Pass.

A9 motorway, exit 22 (Gd St-Bernard). Follow signs for Grand St-Bernard all the way to the pass.

Parking available at the pass.

The tourist office in Orsières has got brochures and information material about hiking in the region.

Question from Malwina Griffin  · May 24, 2020 · Community
Is it a very steep hike that requires a lot of good technique? Thank you
show more Show less

Answered by Ulrich Dochow  · May 26, 2020 · Community
Its Long, not very difficult
Answer

Réka Vasszi
October 15, 2019 · Community
Amazing tour, especially in the autumn months. Take warm clothes, hat and scarf as it can be windy on the top.
show more Show less
When did you do this route? October 12, 2019
Comment 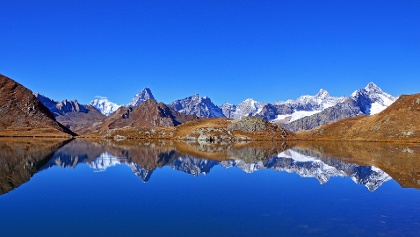 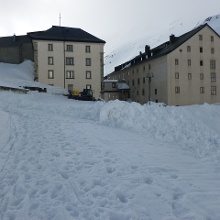 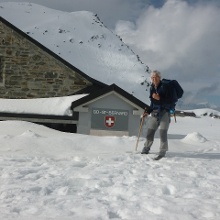 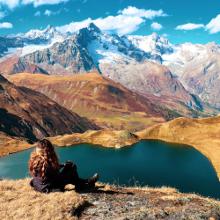