Geological hike to the Vieux-Emosson dam

This scenic geological trail explores the fascinating history of the formation of the Alps. At the trail’s far end, a vast slab of rock carries the fossilised footprints of crocodile-like reptiles that roamed the earth more than 240 million years ago.

The journey to the start of the route, at the top of the Emosson dam, is an adventure in itself. Hikers can drive or take the bus up, but it is far more impressive to ride up from Le Châtelard VS on the trio of mountain railways run by VerticAlp Emosson.

First comes the Funiculaire du Châtelard, the world’s steepest 2-cabin funicular, with gradients of up to 87%. At the top, passengers change on to Le Train Panoramique, a narrow-gauge railway that skirts dramatically above the deep gorges of Le Bouqui, offering superb views of the Mont-Blanc massif. Finally the Minifunic is a 2-cabin mini-funicular that glides up to the top of dam at 1,965 m.

The Emosson Dam, opened in 1976, is the third-tallest in Valais at 180m, and retains Switzerland’s second largest reservoir in terms of capacity: 225 million cubic metres. The hike also takes in a second dam: Vieux-Emosson, which entered operation in 1955 to provide electricity for the Swiss railway network. Recently the dam wall was raised by another 20 m as part of a spectacular engineering project, currently under construction, whose heart lies deep in the rock under hikers’ feet.

The pioneering scheme, due to enter operation in 2019, is based on an innovative new underground power plant. Two vertical tunnels, each 100 m taller than the Eiffel Tower, will carry water between the two reservoirs. A vast, cathedral-like underground chamber will house 6 reversible turbines that can generate electricity when needed – or store energy at times of low demand by pumping water back up to the higher reservoir. This flexibility makes the new Nant de Drance power plant the ideal complement to the new green energy sources – all weather-dependent – on which Switzerland is building its future.

The hike begins at the top of the Emosson dam.

This official route starts by following the shores of the Emosson dam, then climbing to the Cabane du Vieux-Emosson (2,187 m). From here, the trail climbs to the second dam, crosses its crest, and leads above the shores of the Lac du Vieux Emosson to the fossil site (2,400 m). Hikers then return to the start of the trail via the wild and dramatic Gorge de la Veudale – the most challenging section of the loop.

Easier variants of the route are also possible – e.g. walking there and back via the Lac du Vieux Emosson (avoiding the Gorge de la Veudale), and or/ following the small road along the shore of the Lac d’Emosson all the way to the Cabane du Vieux-Emosson.

Note that the fossil tracks are visible from about mid-July, once snows have melted.

Train to Martigny; change on to Mont-Blanc Express.

Either dismount at Finhaut and catch postal bus to the Emosson dam; or stay on Mont-Blanc Express until Le Châtelard VS and travel up to the dam with VerticAlp Emosson (funicular, then narrow-gauge railway, then funicular).

A9 motorway, exit 22 (Gd St-Bernard), follow signs for Chamonix (France). Drive over pass of Col de la Forclaz, drop down to Trient, but before French border look out for turning right towards Finhaut-Emosson. (To travel up to the top of the dam via VerticAlp, do not take this turning, but instead continue on the main road to Le Châtelard VS and park there.) 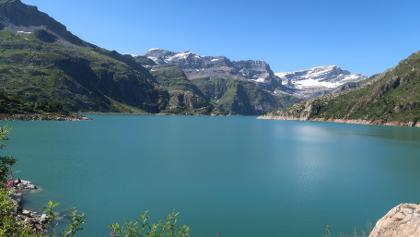 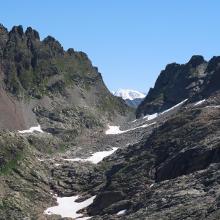 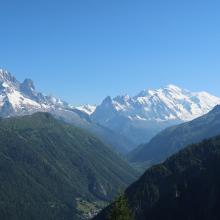 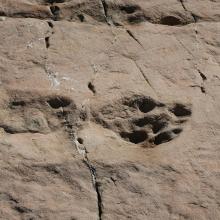