From Visperterminen to the Simplon Pass via the Nanztal valley

The panoramic high trail over the Bistine Pass to the Simplon Pass leads past the crystal-clear Gibidumsee lake and through the pristine natural landscapes of the wild Nanztal valley.
difficult
18.7 km
5:00 h
762 m
723 m

A chairlift carries you from Visperterminen to the upper station of Giw. Immediately you embark on the steepest climb of the whole hike, up to the Gibidum Pass. It is definitely worth making the short detour via the Gibidumsee lake, which serves as a reservoir and also feeds the Heido, one of the famous “Suonen” or historical irrigation channels of Valais. Once, the Upper and Lower Heido served to carry water to the meadows of Visperterminen, but today only the upper channel remains in operation. Since 1916, a 2.65-kilometre tunnel under the Gibidum has carried water direct from the Nanztal valley to Visperterminen.

From the Gibidum Pass, the trail follows the course of the “Suone” into the upper reaches of the wild and pristine Nanztal valley, accessible only on foot. Alternatively, you can take a more direct route to the Bistine Pass by descending to the valley floor near Bististafel and climbing the far side. This is a shorter option but considerably tougher, thanks to the steep descent and ascent, than the gentler route via the upper valley. The Nanztal runs from south to north, and lies between the Vispertal valley and the Simplon Pass.

At Obers Fulmoos, you cross the river Gamsa and start climbing the eastern slopes of the Nanztal towards the Bistine Pass. Up here, you can already see the final goal of the hike: the Simplon Pass with its mighty eagle sculpted in stone. The monument was built during the Second World War by the 11th mountain brigade, who guarded the Simplon Pass, as a powerful symbol of vigilance.

The hike from the summit of the pass down to Blatte represents a descent of about 500 vertical metres, followed by a short climb up to the Simplon Pass.

From Giw (2,000 m), a climb of 200 vertical metres leads via Stafel to the Gibidum Pass (2,202 m). The route then follows the Heido “Suone” (irrigation channel) as far as Obers Fulmoos in the upper Nanztal valley. The hike continues on the opposite side of the valley up to the Bistine Pass. The more direct alternative route from the Gibidum Pass down towards Bististafel and up the opposite side of the valley is tougher, thanks to the steep descent and challenging climb of 600 vertical metres over a distance of 4 km up to the Bistine Pass. The final descent from the Bistine Pass is steep once again, especially at first. After about 5 km you finally reach the Simplon Pass at 2,000 m.

Regular train connections from throughout Switzerland to Visp. Continue by PostBus to Visperterminen. At end of hike, travel by PostBus from the Simplon Pass down to Brig. Find full timetable information at sbb.ch

Parking at the Visperterminen-Giw chairlift; follow local parking directions in Visperterminen. Better still, park instead in Visp or Brig and travel by public transport to Visperterminen and back from the Simplon Pass to your car.

The tourist office in Visperterminen has got brochures and information material about hiking in the region.

Do you have questions regarding this content? Ask them here. 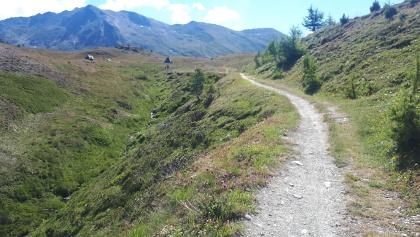 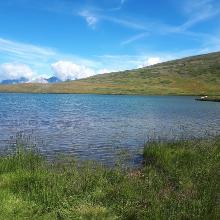 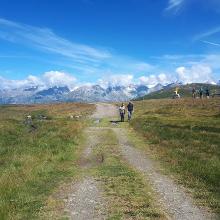 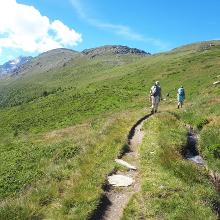