The tourist buro in Binn advised us to walk this trail ...

Loop through the Binntal valley, famous for its glorious scenery, wealth of minerals and time-warp historical villages. The gem at the heart of the Binntal Landscape Park.
moderate
Distance 9.4 km
Duration3:45 h
Ascent649 m
Descent767 m

At the heart of the Binntal Landscape Park is the Sleeping Beauty that gave the reserve its name: the Binntal valley. Until just half a century ago, the valley was cut off from the outside world every winter by snow. Construction of a road tunnel in 1965 enabled year-round access, but the valley has retained its timeless appeal.

The Binntal first became famous for its wealth of minerals. More than 200 have been discovered in the valley, of which more than 100 alone in the world-famous Lengenbach mineral quarry. Our hike begins by the fascinating geological trail that leads from the village of Imfeld (also known as Fäld) to the gates of this quarry. Outside, hikers can search for fool’s gold (iron pyrites) in the snow-white dolomite marble.

From the quarry, the trail traces a sweeping loop across the slopes on the southern side of the valley, to take in several of the landscapes and ecological habitats that make the park so special. The path first climbs steeply to the idyllic mountain lake of Mässersee, before dropping to the lush meadows of Manibode: a wonderfully peaceful spot with its lattice of streams, reddish boulders and flowering alpenrose, all framed by mountains. The trail then leaves this suspended high valley to traverse fragrant forests of pine on a steady descent to the village of Binn.

The Binntal’s reputation as the “Valley of hidden treasures” is also due to its charming historical villages, beautifully preserved. Binn won the Heimatschutzpreis conservation prize in 1992, while Imfeld was the first place in Switzerland to win the medal of the Archicultura Foundation in 1998 for its harmonious appearance. Binn is home to the valley’s only hotel, the Ofenhorn, a belle epoque gem opened in 1883 and lovingly restored over recent years.

From Imfeld, the route crosses the river Binna to head up to the Lengenbach quarry, initially following the road before diverting along a more direct footpath. The geological trail, by contrast, follows the lane all the way to the quarry. Along the way, hikers can get to know the valley’s rocks with the help of hand lenses and even play a musical instrument of stone.

From the quarry, the trail climbs steadily up to Schäre at an altitude of nearly 2,000m, before following a loop up to the Mässersee lake and the Manibode meadows. Back at Schäre, the route does not return along the ascent path but turns sharp left in order to lead down through the forests to Binn.

A9 motorway and main road up the Rhône valley to Lax; shortly after, turn right and follows signs for Ernen / Binn / Imfeld. Park at either the start of finish of the walk, and use the Bus Alpin to complete the loop.

Large car parks just outside the villages of Binn and Imfeld.

The tourist office of the Binntal landscape park has got brochures and information material about hiking in the region.

Giljam Aarnink
August 17, 2019 · Community
The tourist buro in Binn advised us to walk this trail reversed, as the climb from Binn is more comfortable. I think this was a good suggestion. Once out of the woods, the views are spectacular.
Show more Show less
Comment 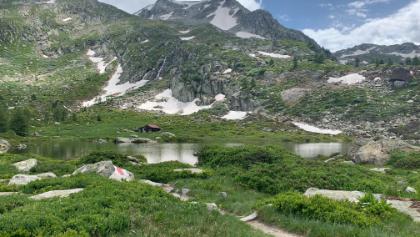 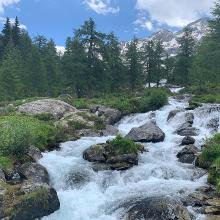