Responsible for this content
Leukerbad
Phil S
on the May 26, 2019

This dramatic walk packs in tremendous variety, even for Valais: culture and history, spectacular mountain scenery, dramatic gorges, winemaking villages and glorious views of the wildest stretch of the Rhône valley.

The hike falls into two halves. It begins at the spa resort of Leukerbad with a descent of the wild Dala valley. Lower down, the trail diverts through the vineyards of two of Valais’ most charming winemaking villages. The route finishes just short of the river Raspille, which marks the border between German- and French-speaking Valais.

The trail is marked as a Kulturweg – «Cultural Pathway» – for good reason. The ancient Romans came this way to frequent Leukerbad’s hot mineral springs, the most abundant in the Alps. For centuries, the Dala valley was an important trade route into Valais – from the Bernese Oberland via the Gemmi Pass. The very first group package tour to Switzerland, organised by Thomas Cook, travelled up the Dala valley in 1863, and the route is now commemorated as the ViaCook.

Part of our trail follows the route of a disused railway line, which ran between Leuk and Leukerbad from 1915 to 1967. But it was another railway line that definitively diverted traffic away from the valley: the Lötschberg, which opened in 1913. In 2007, the pioneering new Lötschberg tunnel opened: 400 metres lower, it can accommodate trains travelling up to 250 km/h.

The first half of the trail follows a scenic route through the Dala valley, incorporating sections of the old Roman path and former railway line. The second stretch leads through the vineyards of Varen (known for its Pinot Noir wines made with grapes grown by natural methods) and Salgesch (home to one of the two sites of the Wine Museum of Valais).

The trail begins at Leukerbad’s Sportarena sports centre, and is clearly marked and easy to follow throughout. To the right of the Dala the path leads out the valley to Inden. About one kilometre after the historic village, the path branches off to the right towards Varen. The route runs along the edge of the Varnerwald and leads via Bärde down to the wine village Varen.

For a slightly shorter walk, finish in Varen. The journey back to Leukerbad usually involves two bus rides, with a change in Leuk; total travel time is about 1 h 25. Transport connections are better, however, from Salgesch: train to Leuk and bus to Leukerbad (about 40 min).

In Varen, it is worth detouring about 200 m south to the hilltop church for a sensational view of the untamed Rhône and the pine forests that form the heart of the Pfyn-Finges Nature Park. Then the route leads through the seemingly endless vineyards to Salgesch.

Salgesch is home to one of the two sites of the Wine Museum of Valais, a gentle walk (800 m) from the station. The other site is in Sierre; the fascinating Sentier Viticole («Vineyards Trail») links the two.

Leuk can be reached by train (SBB), then by bus (LLB - Leuk Leukerbad Bus Reisen) to the starting point in Leukerbad. Find full timetable information at sbb.ch.

From Geneva: Motorway A1 to Lausanne; direction Sion/Sierre; Leuk - Leukerbad.

The tourist office in Leukerbad has got brochures and information material about hiking in the region and will give you detailled information about this hike. 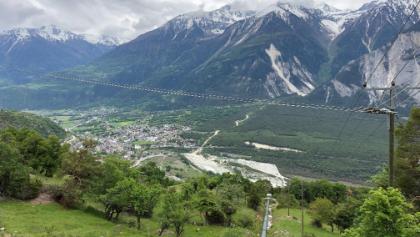 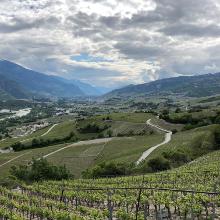 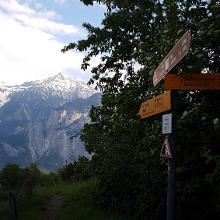 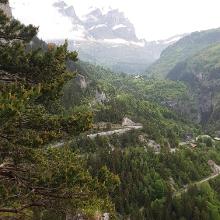