Discover the many facets of the Pfyn-Finges Nature Park on foot: from the idyllic mountain village of Unterems via the dramatic Bhutanese suspension footbridge to the European Energy Award town of Leuk.

This route passes through an inaccessible area and is therefore closed. Current information

Starting point for the hike is the mountain village of Unterems, at an altitude of 1,003 m,

accessible via a small cable car from Turtmann: the ride is an adventure in itself. The trail begins with a descent westward across pastures. Pause to take in the view of the slopes opposite: in autumn, especially, the sight of the fire-red European smoketrees is spectacular.

The path leads through the forest down to the Emsbach river, and then follows a “Suone” irrigation channel for a while to reach the Meretschibach. After crossing the river, the path climbs steeply before leading above the hamlet of Feithieren towards the Illgraben ravine.

Its river, the Illbach, looks innocuous enough in fine weather but during storms, or when rain combines with meltwater, it turns into a wild torrent carrying impressive quantities of rocks and silt. This rapid erosion has enabled the river to carve a course 1,500 m into the mountain and deposit the rock in the floor of the Rhône valley. Today, the Pfyn-Finges forest and the fields around Susten lie on top of such debris. Because of this geological activity, the Illgraben is a research area of national importance, equipped with monitoring and early-warning systems.

A pedestrian footbridge, 134 m long, spans the Illgraben. It was built in 2002 – declared International Year of Mountains by the UN – in Bhutanese style, with support from the kingdom of Bhutan. Decorated with prayer flags, the bridge represents a link of friendship between the two countries.

The hike begins in the village of Unterems with a descent towards the west. After crossing the Emsbach and Meretschibach rivers, the trail climbs to the Untermeschlerwald forest. A flattish stretch traverses the woods as far as the hamlet of Pletschen, from which another climb leads to the Bhutanese bridge.

The suspension footbridge spans the highly eroded Illgraben ravine. The route then continues northwards through the protected Pfyn-Finges forest. The Illbach river flows into the Rhône at the north-eastern edge of the forest; the walk finishes close by, at Leuk railway station.

Regional train as far as Turtmann; change on to bus to the base station of the Turtmann–Oberems cable car. Find full timetable information at www.cff.ch

A9 motorway to Leuk. Ideally, park your car at Leuk and continue to the starting point of the hike via public transport.

Ideally, park at Leuk railway station and continue to Unterems via public transport. Follow the local directions for parking in Susten/Leuk.

The tourist office in Leuk-Susten has got brochures and information material about hiking in the region. 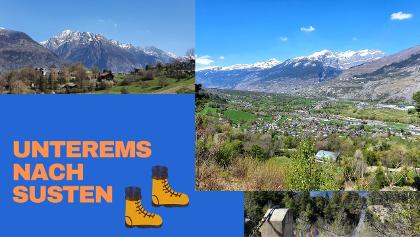