Responsible for this content
Leukerbad
Botond Pekar
on the April 03, 2021

Starting point for the hike is Rinderhütte, the summit station of the cable car from Leukerbad. The climb leads across the alpine pastures of Torrent, where many cows, sheep and goats spend the summer.

The path leads steadily towards the western ridge of the Torrenthorn via the Rinderhalte pastures, where hikers will frequently hear the whistling of marmots.

At an altitude of around 2,700 m, the grassy alpine meadows give way to rocky terrain. Up on the ridge you enjoy a magnificent view of the Majingalp pastures and the dramatic Montanji cliffs: best known for the precipitous Gemmiwand rock face above Leukerbad, they extend eastwards all the way to the summit of the Balmhorn on the border between Valais and the Bernese Oberland.

After about another kilometre you reach the summit of the Torrenthorn, also known as the “Rigi of Valais”. From the summit you have a complete 360° panoramic view, and on a clear day you can see peaks including the Jungfrau, Bietschhorn, Monte Leone, Weissmies, the Mischabel massif, Monte Rosa, Matterhorn, Grand Combin and even Mont Blanc.

For the return leg, the most direct route is along the ridge and via the historical Hotel Torrenthorn back to Rinderhütte. However, it is also possible to extend the hike via alternative descents. For example, you can follow the ridge south towards the Schafberg and climb another peak before following the alpine route (marked white-blue-white) down to Rinderhütte. Another alternative is to turn north at Rinderhalte to descend to the Majingalp pastures, and then walk along the Dala river back down to Leukerbad.

Take the cable car up to the summit station of Rinderhütte, and then climb the path across the alpine meadows to Rinderhalte. The route then leads along the western ridge up to the summit of the Torrenthorn. The descent as described leads initially along the ridge but branches left just before Rinderhalte to descend across meadows. The trail leads past the former Hotel Torrenthorn and continues descending to Rinderhütte.

Leuk can be reached by train (SBB), then by bus (LLB - Leuk Leukerbad Bus Reisen) to the starting point in Leukerbad. Find full timetable information at sbb.ch.

From Geneva: Motorway A1 to Lausanne; direction Sion/Sierre; Leuk - Leukerbad.

The tourist office in Leukerbad has got brochures and information material about hiking in the region and will give you detailled information about this hike. 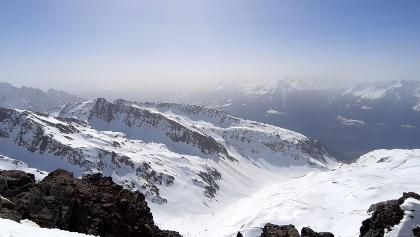 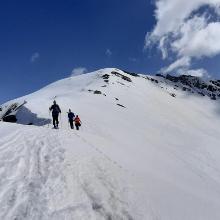 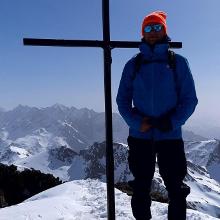 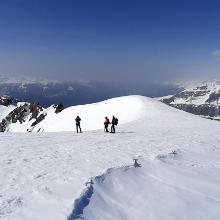